some side notes:
-don’t generalize your perception of each member off of description, the best way to learn and understand them each individually is by watching videos, reading interviews, etc. (underlined words are links to videos and interviews) 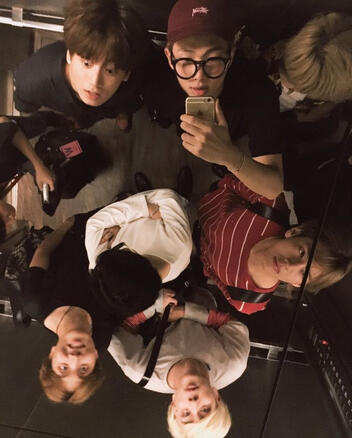 more facts and personality:
-middle member
-only one who speaks fluent english, taught himself through watching the sitcom ‘friends’
-a great leader, very thoughtful
-gave a full speech at the UN

more facts and personality:
-worldwide handsome, you’ll hear it a lot
-has his own mukbang show called ‘eat jin’, he’s a great cook
-the oldest member
-caring, humble, funny
-jin was scouted by BH for his looks while walking down the street, he had no background in music or dance and has improved tremendously since then

*recently yoongi had surgery for his shoulder and is in recovery so he may be less active in current promotions... read more here

more facts and personality:
-bright personality
-he often teaches choreography to the rest of the band and is always trying to help them improve
-hope on the street

more facts and personality:
-maknae line
-shortest (?) member
-he is very expressive in his style of dance; the other members praise him for it.
-top student in school and studied contemporary dance
-thoughtful and affectionate
-social butterfly; close with many idols such as SHINEEs taemin, EXOs kai, and HOTSHOT/WANNA ONEs ha sungwoon

more facts and personality:
-maknae line
-he and jimin are considered the ‘95 line and were classmates in highschool
-has a dog named yeontan (tannie)
-his voice is pretty distinguishable amongst other members (deep and soulful)
-sociable and friendly (taes friend group: wooga squad)
-added to the dance line in 2018 after singularity